Is Russia a great danger?

Posted by Christopher at 7:54 PM No comments:

So my friend Kevin and I were talking about how we're "writers" who never write. So in order to fix that we gave one another writing prompts and wrote.
Here was the prompt Kevin gave me:
The environmental movement has failed. The ecosystems of the Earth are tipping into chaos. Hurricanes, droughts and freak ice storms ravage the land. Only a small band of colonists on an experimental space station orbiting the Earth are safe, but their resources are thin. The future looks bleak, but somehow the diverse colonists from the dying Earth must find hope.
And my 30 minute free write (please forgive me the cursing--when earth is dying and people aren't acting as expected I allow for some cursing):
“I can’t go on.”
Teresa looked up from her pillow, “Fuck you Frank. Fuck fuck fuck. I thought you’d be the last person to experience The Sickness.”
“Why? Because I grew up out here? Out here alone on a space station? Is that why I shouldn’t care that The Earth is dying?”
Teresa sighed and pulled herself out of the small Wall-Cot the two had shared that night. She wrapped her arms around Frank’s chest. He was wearing a white wife-beater—it had been washed often enough that it was a few shades darker than the interior of his Living Pod-- and boxers with little green space men with cowboy hats on them.
“I really can’t. Mom told me stories of The Earth, everything we learned from our virtual classes was based around the assumption that my generation would eventually leave Nimbus. Time is based off of Pacific Standard.” he was crying, his words came out elongated by the intake of his breath, “It’s like heaven to me. Its like heaven is eating itself because the angels rebelled.”
Teresa hugged him tighter. She ran her fingers through his short spiky black hair. “Frank. Frank, earth is… well its dying. Its as good as dead. And what you cry for as an angelic reality the rest of us see as… as home. My sister was in Tampa when Hurricane Thomas leveled Florida. My mom and dad might or might not be alive after the freak scorching of the great plains… I should be the one with The Sickness. I should be the suicidal one—trying to throw myself out a space lock to get home… to die with the rest of our kind.”
Frank pulled away from Teresa’s ever tightening embrace, “You’re the captain Teresa, you can’t break down. I just serve slop three times a day. My Earth, the one escape from Nimbus, is gone. The best I can ever hope for is serving re-processed food to your crew.”
“I don’t have time for this,” Teresa turned away from Frank, so he wouldn’t see her tears. She picked up her zuite-suit style uniform off the glowing white floor, stepped into the silver leg holes, pulled, and the uniform zipped itself up into one whole cloth uniform.
“Pod nine, open,” she said. It complied, every commandable part of Nimbus was auto-locked to Teresa’s voice.
She walked passed the doors to the twelve other pods in the Male quarters. Three, Four, and Seven were empty, their occupants had succumbed to The Sickness. Randal and Nate had both thrown themselves out of space locks. Tanisha had managed to snag Randal with one of Nimbus’ collection arms. He was stored in a freezer. Nate was floated away—slowly toward the blue orb that he called home—even as it’s ecosystem destroyed itself. She didn’t even want to think of how the ship’s botanist, Alphred Whitecliff had killed himself.
She returned to the Female quarters. Only one of the pods was empty. Alice had been Nate’s lover.
“Captain’s pod, open,” The pod to Teresa’s left swooshed open and the floor and walls began to glow.
She entered, pulled out her Wall-Desk and Wall-Chair and sat down. “Close door.”
“Any messages?”
“Two messages Captain.”
“Well?”
“Message one. Captain Dartanian, this is Commodores Perry and Wilson. We have some… rather bad news. After the destruction of the Southern United States and Northern Mexico by Hurricanes, Althea, Thomas, and Winston congress was dissolved by President Barnheart. The European Union and the Russian Confederacy have contacted the two of us and are asking us to join them in an attempt to stop this grab for power. We are about to declare the United States Space Fleet as an enemy of Barnheart’s tyranny.
Posted by Christopher at 7:45 PM No comments:

Email ThisBlogThis!Share to TwitterShare to FacebookShare to Pinterest
Labels: creative writing, my life

And the children shall guide thee

Well, even as the adults of the ELCA prepare to descend on Minneapolis and get grouchy and self-righteous about inclusivity/purity let us pause and look at what our youngin's did in New Orleans.
A few" quotes:
"We're humbled. Humbled at their generosity. Humbled at the sight of so many young people traveling so far to do so much hard work during their summer vacation. Humbled that the "Katrina fatigue" felt by so many Americans was replaced, for a few days, with an enthusiasm even some of us find hard to muster some days. Regardless of your faith, or lack thereof, these excited young volunteers were an inspiration, and just one of them accomplished more good than all the preachers and politicians in the world who saw Katrina as either perverse justice or crass opportunity."
"How do you thank someone for helping rebuild your city? It's a question with which we've all wrestled during the past four years, and the answer is: You can't.But the simple act of buying a stranger a breakfast said "Thank you" in myriad ways: Thank you for coming. Thank you for caring. Thank you for your sweat and your optimism, for your curiosity and bravery in traveling to a place so unlike your own home. And, when many in the rest of the country seem to have "gotten over" Katrina and can't understand why we can't, perhaps the real message was: Thank you for not forgetting."
Posted by Christopher at 10:33 AM No comments:

Email ThisBlogThis!Share to TwitterShare to FacebookShare to Pinterest
Labels: ELCA

Christopher Hitchens gets all sentimental

Posted by Christopher at 9:57 AM No comments:

Well, as some of my readers know I'm a dog person. I got a poodle, woofer, when I was very young and a had a yorkie-poodle, Baby, from 4th grade until a year after I graduated college. I tell people I was raised by a yorkie-poo, my parents called Baby my sister... so understand I'm a dog person.
Two weeks ago I was in Wisconsin with my good friend Kate, we were driving back from Dave's Falls and saw a sign for free kitties. We stopped, because Kate likes kitties. One of them, a little black kitty with blond/brown markings started following me around, headed toward the car when we started to go... And it did the irresistible puppy(kitty I suppose) eye thing. So unfair... Then I did the dumbest thing I've done in a while, I named the thing.
And so... well, I'll let someone else tell the story (from Kate's email):
I talked Chris into getting a kitten instead of another little dog that a 15yo blind cat missing a leg could beat up. He found one when he was here and named it Simul Justus et Peccator which is Latin for simultaneously being a saint and sinner (can you tell he's a big Lutheran dork?). He got confirmation from the people in charge of his housing in Baltimore this year to have a pet and today I went back to the house w/the free kittens and picked up little Simul for him. She's spent most of the evening hiding under the TV cart sleeping on top of all the electronic spaghetti, but I thought you'd like a picture anyway. There are some adjustment issues w/the 3 kitties right now, but they'll have to deal until Chris comes back through in a couple of weeks. She's very cute! And likes to cuddle and purr.

So I present to you dear readers Simul Joy Halverson: 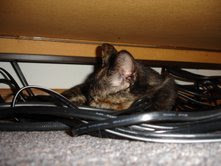 Email ThisBlogThis!Share to TwitterShare to FacebookShare to Pinterest
Labels: my life

The variety of local extremism pushing against the global status quo--nation state etc is strange. I wonder if linking extremists ala "War on Terror" is helpful or not. Seriously, I tend to prefer taking on extremists on a case by case basis--more police actions less military interventions, but the broadness of these movements--local yet popping up in many locations--makes me just wonder how all of this should be thought about.
If we lump all islamic extremists/practitioners of terror together and deal with them the same we loose the advantage of being able to play them off of one another and give them a nation state like status. Any action any where can fall under the banner of Bin Laden, he becomes prime minister of terror.
On the other hand the global nature of this thing does indicate that what is going on is not just a bunch of local grievances being expressed through violence.
A few thoughts. Fewer answers.
Posted by Christopher at 11:15 AM No comments: