The Parable of the Shrewd Manager 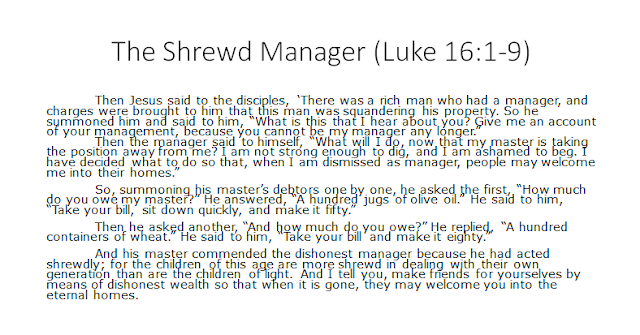 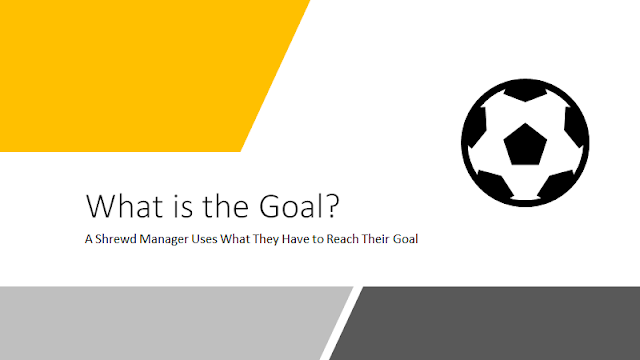 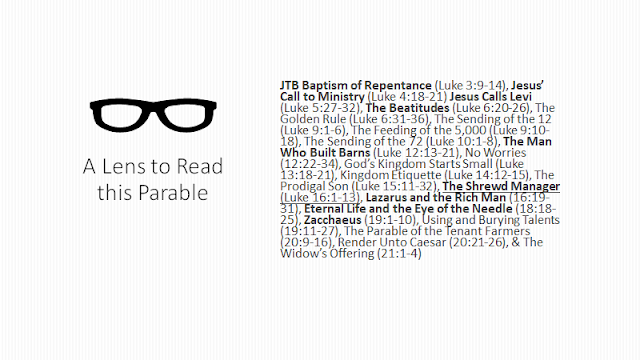 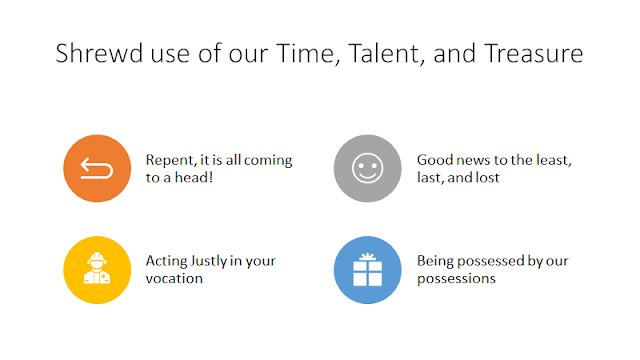 Posted by Christopher at 10:22 AM No comments:

Email ThisBlogThis!Share to TwitterShare to FacebookShare to Pinterest
Labels: sermon

The Parables of the Lost

As we consider Jesus’ parables of the Lost, let’s do so with three different lenses:
1. Modernization (Sheep and Coins in the world of concrete and credit cards)
2. Practicality (what does repentance look like in concrete terms?)
3. Who is this story for? (liberating for some and challenging for others)

1.   Modernization
Now, all the loan sharks and sinners were coming near to listen to Jesus. And the Preachers and Church-folk were grumbling and saying, “This fellow welcomes sinners and eats with them.”
So Jesus told them this parable: “Which of you, having 100 pre-school students at the zoo doesn’t leave the ninety nine at the predator exhibit and go after the one student that is lost until she finds the child? When she has found the child, she lays him on her shoulders and rejoices. And when she comes home, she calls together her friends and neighbors, saying to them, ‘rejoice with me, for I have found my student that was lost.’ Just so, I tell you, there will be more joy in heaven over one sinner who repents than over ninety-nine righteous persons who need no repentance.
Or, what person, when turning on their computer to do a task that will take one hour, realizing that their internet doesn’t work, would not spend 10 hours trying to restore internet to their home? And when they restore the internet, they call together their friends and neighbors saying, “rejoice with me, for I internet again!” Just so, I tell you, there is joy in the presence of the angels of God over one sinner who repents.”

2.   Practicality
“There is joy in the presence of the angels of God over one sinner who repents.”
As Luther wrote at the beginning of his 95 thesis:
“When our Lord and Master Jesus Christ said ‘Repent’ he willed the entire life of believers to be one of repentance.”
Yes, repentance is the struggle of the Christian life, yet, we Christians sometimes spiritualize repentance to such an extent that it becomes a theoretical concept, a kind of head game, when in fact it is a matter of the heart and a set of concrete acts that have ongoing and freeing effects…
You may remember back in Lent we took some time with Desmond Tutu’s Four-Fold Path of Forgiveness— Tell the story, name the hurt, grant forgiveness, and renew or release the relationship.
There is, as you might imagine, a corollary to these four steps, four steps to repentance:
1.   Admit the wrong—note that this is the first, not the last and only, step.
2.   Witness the anguish and apologize—you may think you know the harm you’ve caused, but you need to really knowwhat you are confessing before you can rightly move on
3.   Ask for forgiveness—you give the power back to your victim, you are committing yourself to the possibility of change, asking to begin again, offering to make amends.
4.   Renew or release the relationship—The victim may choose to renew their relationship with you, or they may not, yet you may both move forward into the future.
As with the Fourfold Path of Forgiveness there are no time limits to these steps, they ebb and flow as the relationship and circumstances of both parties dictate the pace, the victim may put an end to things at any point.

3.   Who is this story for?
Just look at how sensationalthese parables are… isn’t there something clearly over the topabout these parables of the Lost in Luke’s Gospel—they almost feel like a tabloid headline or clickbait on the internet:
“Local Shepherd abandons flock!!!”
“Woman loses coin, you won’t believe what she does next.”
There is something offensive to it, welcoming, rejoicing, eating with tax collectors and sinners… If you are the 99 who are offended by Jesus hefting sinners upon his shoulders, the 9 put aside while Jesus sweeps the house so thoroughly—then the whole thing seems ridiculous…
but if you are the lost
-if your soul exists only because Jesus persistently plugs in the router until the wi-fi works,
-if you’re that child who stopped at the bathroom in the zoo and looked up and lost the group and can only get home if your teacher Jesus finds you,
-if you’re the coin cast away in a cold corner of a room,
-if you’re the sheep in need of your shepherd…