I remember, whenever someone would say something bad about the Government my mom would get a little flustered and respond, “We are the government.” This from a life long civil servant. She worked from the Department of Defense as the only civilian pharmacist at the NATO Health Clinic in Brussels during the twilight of the Cold War and still keeps our promise to America’s veterans at the VA to this day.
And I believe that statement by my mom is on trial this election. Do we as a country believe that we are the government or is the government a nefarious entity that we should be afraid of?
I vote for the first one—that government is of the people, by the people, and for the people.
We, as the government, do together what we can’t do alone. We, as the government, protect citizens who can’t protect themselves. We, as the government, govern as we wish to live.
We do together what we can’t do alone. For example, the government acted to keep us out of a second Great Depression. One of the ways we did that is being argued about today, whether the Federal Government should have bailed out American car companies. We did, it saved millions of jobs in the American Auto-industry. Governor Romney says we should have let private firms bail out the American car companies, yet there was neither private capital nor private will to do such a thing. Yet, for the sake of millions of Americans, there was a need to save those jobs and keep the recession from becoming a depression. So we, the government, bailed out the car companies.
Likewise, at this very moment we in New Jersey are pretty glad America is working collectively through agencies such as FEMA to assist us in our hour of need. Governor Romney has said he would break up FEMA and either pass it’s responsibilities on to state government or privatize it. I’ll be frank, I’m glad all of America is flexing our muscle to get things done here. I’d rather have all of us working together to fix the many bruised lives instead of 1/50th of America’s power working to bring power back and get life back to normal.
We protect those who can’t protect themselves. There are forces, like Super Storm Sandy, that are too big for any one of us to handle on our own. In my own life, the force that is bigger than I am is being one of the 57.2 million Americans who have a pre-existing medical condition. The Affordable Care Act (aka “Obama-care”) moved we the people into collective action against the bad practice of discrimination against people with pre-existing conditions.
Now, during the debate Governor Romney said, while he would repeal “Obama-care” on his first day in office he would make sure people like me won’t be discriminated against. Then, after the debates, he explained what he meant. He won’t allow me to be discriminated against, as long as I’m already covered, but if I go without insurance for even a month, for whatever reason, we the people will no longer protect me from discrimination. As long as I’m not applying for insurance I’m protected from discrimination.
I prefer the other path, the one where we protect our people on good days and on bad ones too.
Finally, we govern as we wish to live. Now, I grew up in Wyoming so, Ayn Rand (the writer/philosopher who Representative Paul Ryan claims got him interested in public service) and extreme libertarianism—do it on your own or die rhetoric—gives me a certain reflexive cuddly warm fuzzy feeling. But then I realize a dog eat dog society isn’t the kind of society I want to live in.
After Sandy my next door neighbor could have let my cell-phone go dead, but instead when she went to her sister’s house to charge her phone she offered to charged mine there too. I braved post-storm South Plainfield on foot to check on my parishioners, not because it was my job and I’d get paid for it, but because it was the right thing to do.
And I think we should govern based on the type of neighborhood and society we believe we should live in. For example, every four months, I send a check for $2,500 to the IRS payable to the Treasury Department. I’ve heard libertarians (sometimes even libertarians citing St. Augustine’s discussion of Piracy and Government) call that theft. I call it an investment in the society I want to live in. That $2,500 goes to our collective defense, to fulfilling our promise to our soldiers when they come home, to my aunt’s 3 adopted kids, to my older friends who have been able to retire with dignity and in good health, to ensuring healthcare for people with pre-existing conditions, and to rebuilding New Jersey and the tri-state region.
(This post does not reflect the views held by the ELCA, the New Jersey Synod, or St. Stephen Lutheran and should not be seen as a political endorsement by any church body)
Posted by Christopher at 10:01 AM No comments: 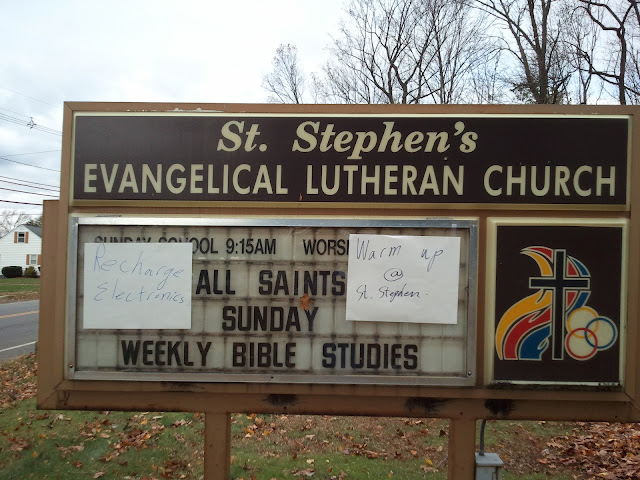 Posted by Christopher at 10:30 AM No comments:

First and foremost I’ve visited most St. Stephen folk within walking distance of church and the parsonage that I could find without googlemaps. Everyone I’ve seen is okay, a beloved truck was smashed, fences are down, trees are in people’s yards, but we’re okay.
Second we have power at the church. I’m going to be here at least until 5pm tonight (I might even be having a slumber party here depending on how cold it’s feeling--if there are enough of us in need of warmth and power we'll make a night of it) so if folk need to warm up or charge their varied electronic devices please stop on by St. Stephen.

Dear Sisters and Brothers in Christ,

As electric power begins to return, we have become more able to assess the damage from the storm. To this point we believe all of our rostered leaders are safe, although there are some whom we are still trying to reach, most serving on the barrier islands. Pastors and lay leaders have been trying to reach members of congregations, especially the most vulnerable, to make sure they are safe and to learn what they need. This is our immediate life and ministry together.

The devastation on the barrier islands, as you know, is massive. Because people have not been able to return to places like Long Beach Island, we cannot be certain about the condition of church properties. (We are presuming that leaders and members heeded the mandatory evacuation order and are safe.) Churches in Lavalette, Brant Beach, and Barnegat Light probably have suffered the most damage. We have yet to hear from Cape May and Wildwood and Asbury Park. Ocean City, Stone Harbor, and Somers Point are okay. But in all Shore communities, from Cape May to Sandy Hook, and inland for many miles, as you are well aware, people are dealing with very serious challenges.

All of you continue in my thoughts and prayers. God bless you with abundant grace, strength, hope, and peace in these days.

A Prayer from Julian of Norwich (A.D. 1342-1416)
In you, Father all-mighty, we have our preservation and our bliss.
In you, Christ, we have our restoring and our saving. You are our mother, brother, savior.
In you, our Lord the Holy Spirit, is marvelous and plenteous grace.
You are our clothing; for love you wrap us and embrace us.
You are our maker, our lover, our keeper.
Teach us to believe that by your grace all shall be well,
and all manner of things shall be well. Amen.

ELCA News:
As you might have guessed we are the national news
ELCA Disaster Response begins relief efforts after Hurricane Sandy

CHICAGO (ELCA) -- In the wake of Hurricane Sandy and its subsequent storms, the Rev. Mark S. Hanson said that the 4.2 million-member Evangelical Lutheran Church in America (ELCA) is "in prayer and will respond generously and work tirelessly to rebuild lives, congregations and communities."
In an Oct. 31 video, Hanson, presiding bishop of the church, said the recovery work will not be done alone. "Through ELCA Disaster Response, we will join with our congregations, affiliates and other partners in our shared commitment to restore communities. As we have shown in past disasters, we stay until the work is done. That is the ELCA's commitment."
Some ELCA congregations along the U.S. Atlantic coast have reported damage. In the Caribbean, the storm has caused an estimated $88 million worth of damage to Cuba's second largest province and taken the lives of 11 people. In Haiti, 51 people have been reported dead and severe flooding has damaged roads, homes and farmland.
"In the face of this horrific storm the church is present in the United States, Canada and the Caribbean for relief, to rebuild and to renew the lives of those who have stood in the path of destruction," said the Rev. Daniel Rift, director of ELCA World Hunger and Disaster Appeal.
"The church's work in these times benefit from our experience in disaster response, having already been present and prepared," said Rift. "Gifts given previously to ELCA Disaster Response enabled us to support the prepositioning of supplies in the Caribbean. That means we are already at work in bringing aid."
While much of the damage on the east coast of the United States still needs to be assessed, many ELCA synod offices closed early in anticipation of the storm. After losing electricity on Monday night, the Rev. Claire Burkat, bishop of the ELCA Southeastern Pennsylvania Synod, reported that "it might be days until (the power) comes back" and that it was "too dangerous for utility and Internet providers to work."
"Communication and collaboration among our faith partners has been swift and effective," Burkat reported. "We pray that the Lord of Sea and Sky will continue to be with and protect those people and living creatures who are at risk from the wind, rain and flooding due to this massive storm."
In hard-hit New Jersey, the Rev. Roy Riley, bishop of the ELCA New Jersey Synod, was optimistic. "We were blessed to have the weekend for families and communities to make preparations. In our congregations, there were reminders on Sunday to remember the most vulnerable and check in with them as possible before and during the storm."
"In the past few years this synod's congregations have sent response teams to the U.S. Gulf Coast, Upstate New York, and places closer to home," Riley stated. "We should know the drill by now. Nevertheless, we are hoping for the best possible outcome but recognizing the significant challenges that lie ahead."
The ELCA has a long history of responding quickly and generously to natural disasters.
"The verbosity of this storm invites a response similar to that mounted over six years ago to Hurricanes Katrina and Rita," said Rift. "In New Jersey, New York and Pennsylvania, we have recent experience in coordinating repair and cleanup after floods last year. We expect to continue and reactivate programs and to expand this work in other states where the storm continues to progress."
"Gifts can be directed for the work in the United States, Caribbean or for either locations as needed most," said Rift. "In all cases, 100 percent of gifts for the Hurricane Sandy response will be directed for response."
View the video message from the ELCA presiding bishop at http://youtu.be/xrsGUUgU7YM. Information about ELCA Disaster Response is available at http://www.ELCA.org/disaster.
Posted by Christopher at 8:57 AM No comments: