My All Saints Sunday/Post-Sandy Sermon

For the whole service click here.
Otherwise:
On this the first Sunday all together since Hurricane Sandy, and this celebration of All Saint’s Sunday—I bid you greetings and peace.
Today, as we note the death and destruction that is in our rearview mirrors, yet still too close for comfort:
trees down, subways flooded, and amusement park rides thrown into the sea.
Today, as we continue to live with that shadow of death, where we’ve always been, just more aware of it at some times than others.
Today, I would like to speak with you briefly about death and our life in God.
About death being the great unknown and the experience of loss,
as well as the promise that God is with us in that loss and that the unknown is known to God.
Let us Pray:
In so many ways our life is saturated with death—it clings to us like sopped up wet cardboard to the side of a building. And when we notice it, moldering there, it scares us.
And rightly so, death is the great unknown—the end-point of expressible experience—in the normal course of life the average person can do a lot of things and live to tell others about them, but death isn’t one of them.
What can be experienced of death—by those who survive, is separation—separation from a loved one—a sense of loss.
Death is the great unknown. It’s an end-point. You may remember from Geometry the end point is simply the place where a ray becomes a line, where it shifts from being an unending line going forward forever and becomes a full stop measurable unit.
And that full stop—death—like the sudden end of a booming symphony or the silence in the eye of the storm—is eerie—it’s disconcerting, it’s down right frightening.
And that fright is nothing new—our fear of death is nothing new. In fact it’s quite old.
In the book of Isaiah we read of “death.”
Death, in the mythology of the Canaanites was not just the experience of the unknown end—but The Unknown End Itself—the horrible creature—Death.
Death was the eater of worlds, the consumer of life, the ender of all that is.
It was believed that the trajectory—the flight path—of all that is, was known—it’s ultimate resting place was the unknown cavernous belly of the beast death.
Yes, for the ancients death was a cosmic ravenous beast that would eventually eat the whole world. Death was the ultimate end point.
Death too, is an experience of separation. Think of Mary and Martha, weeping effusively, for their brother Lazarus—in their grief reproaching even Jesus. Think of the position they were in, a position of loss—separated physically by the rock at Lazarus’ tomb and cut off spiritually from their brother by the grave.
If there is anyone within the sound of my voice who hasn’t experienced the separation of death—remember back to Monday night and Tuesday. Remember trying to contact your loved ones, while being without power, how you were separated from them—
remember that and you get the smallest glimmer of what Mary, Martha, and the rest of us experience.
Or think of when you wandered into the bathroom at night and tried to turn on the light—you knew it wouldn’t turn on—but you still acted like the electricity was on. You remembered what having electricity was like—it should have been there—but it wasn’t.
That, again, is the tiniest touch of the separation that death brings.
And in those moments of separation—those moments of the terror of death. In these moments when our world is turned upside down. In those moments when we find ourselves with Mary and Martha at the grave.
In those moments, Jesus is there with us. Jesus is there in this mess, with us in death.
He is there weeping with Mary and Martha—and Jan and Bob and Loraine.
He is there taking-on their reproach—bearing our pain and hearing our cries.
He is there in the stench of death at the tomb—and on Staten Island, Sea Side Heights, and everywhere destruction holds sway.
He is there with Lazarus as he unbinds the strips of cloth from his re-animated body—and with us as we find wholeness within our broken lives.
Jesus is with us in our separation from those we love and as we suffer from that beast Death. He weeps with us as we weep, dies with us as we die.
But not only that—we read in Isaiah that Death—that consumer of worlds, is consumed by God. The eater is ate.
That the end note to the symphony of creation is just a rest.
That the storm does pass.
That the ferocious end point to end all lines is ultimately slurped up like an extra-long spaghetti noodle.
That Jesus doesn’t just shed tears with us, but that on that day he will wipe away every tear.
That like Lazarus we too will come out of the tomb, and like Jesus we will be resurrected.
The timeline with the fierce ending—Death, is met with the One who can say, “I am the Alpha and the Omega. I am the Beginning and the End.” The timeline that has an end has no power over the one who is the end, and the beginning.
We who are, who were, and who will be—All the Saints of God—are all caught up in the One Who Was, Who Is, and Who Will Be.
I know I’ve used this image before—but look at the altar rail. It’s a half circle, because, as we receive God’s grace by physical means we are joined—completing the circle around God’s table and around his throne—with the saints who have came before us and those yet to be born—all sustained together in that meal which consumes death and wipes away the most mournful of tears.
And that circle of saints surrounding God that we are a part of, reminds me of what I believe will be the emblematic image of Hurricane Sandy—Jane’s Carousel in Brooklyn Bridge Park. 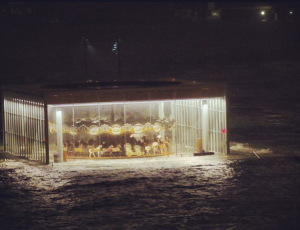 It’s this carousel—a merry-go-round—from 1922 with three rows of wooden horses and carriages lit-up and circling one another.
During the height of the storm this couple, right before they were evacuated, looked out their window and saw a darkened New York Cityskyline, dark save for that carousel—lit-up, waves and storm lapping at its base.
And that’s us, around that table—three rows of saints, those present, those past, and those yet to come—the storm breakers-Death, the darkness drear at our feet, yet still lit, lit by that one true light… still Thou our Lord, our one true light.
Still singing together, “Holy Holy Holy Lord, God of power and might, heaven and earth are full of your glory. Hosanna in the highest. Blessed is he who comes in the name of the Lord. Hosanna in the highest. Hosanna in the highest.”
Posted by Christopher at 7:31 AM 1 comment: