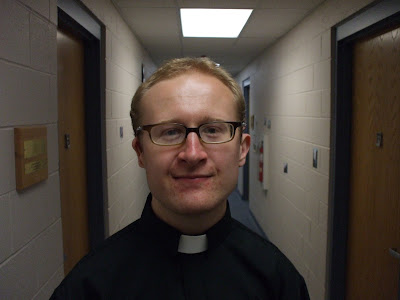 Above is a picture of me with my new haircut, and trying on "The Dog Collar."
Peace,
Chris
Posted by Christopher at 8:45 PM 3 comments:

Email ThisBlogThis!Share to TwitterShare to FacebookShare to Pinterest
Labels: my life

More about the voting math

Check it out. Hillary thinks she has the popular vote if you count Michigan and Florida... as long as you don't count states that had caucuses.
Peace,
Chris
Posted by Christopher at 8:40 PM No comments:

Email ThisBlogThis!Share to TwitterShare to FacebookShare to Pinterest
Labels: politics

Hello. My name is Chris Halverson; I am a Seminarian at LTSP here in Philly. I have been a Democrat since George W. Bush defeated McCain back in 2000. I have worked hard for the party in 2002 and 2004 and would have done so in 2006 as well except I was out of the country. I love this party and I am worried the way in which you are campaigning is tearing it apart.
That you have decided to throw the "kitchen sink" at your opponent is truly sad. That you insist on insulting Bill Richardson (my choice for President until he dropped out) and branding him "Judas" is not acceptable or frankly unpresidential. Your clinging to the racially charged rhetoric of cocaine was out of bounds, and your campaign’s comparison of Sen. Obama to Jesse Jackson was patronizing at best.
In short I think the longer you stay in the race the less likely there will be a Democratic President elected in 2008. This is especially true if you continue to campaign in such an embarrassing and mean spirited way. If Sen. Obama ends up being our nominee you have wounded him severely in the eyes of the American public, his rival will be able to say something like, “Even Bill and Hillary Clinton say, you are too liberal, you sell cocaine, etc.” If you are the nominee you will have so alienated everyday voters such as myself by your acidic attacks and unkind words that we are going to have a VERY hard time voting for you.
At this point you have to know the numbers are against you, the only way you can win is by overturning the will of the electorate. I’ve run the math; you would have to win 69% of the vote in ALL the remaining state in order to get ahead of Obama. If Florida and Michigan are counted in the MOST favorable way for you, by this I mean assuming any vote not actually for Obama is for you, you still need to get at least 58% of the vote in ALL the remaining states. This is not going to happen, so again the only way you can win is by overturning the will of the electorate.
For the good of the Party, and ultimately for the good of America, please quit the race, or at least act civil toward your fellow Democrat, your fellow Senator, and your fellow citizen, Barack Obama.
Thank you for your time,
Christopher Lee Halverson
If you agree with my sentiments send Hillary a letter expressing your own frustrations about the harm being done to the Democratic Party. You can send it to her campaign here: http://www.hillaryclinton.com/help/contact/
Posted by Christopher at 7:33 PM 1 comment:

She says if Iran obtains and uses a nuke vs. Israel her administration would "obliterate" Iran.
Honestly I don't think she is saying this because she wants to go to war with Iran, I think she's saying this because she wants to score political points and appear to be a hawk... And that's what worries me. If she's caught in "look tough" mode we'll never get out of Iraq! If she's so worries about not looking "liberal" she'll be paralyzed by the pro-war noise machine once she's in office.
Peace,
Chris
PS I voted for Obama today!
Posted by Christopher at 10:38 AM 2 comments: