A story about Jesus' Sermon on the Mount

There was once a village, and at its center was a maze, and in that maze was a monster, vicious and cruel, death dealing to an extreme. But the villagers said to themselves, “stay on the safe side of the maze, and you’ll be all right.”
But it seemed the monster could navigate the maze and get in and get out.
So, the villagers built a wall around the perimeter of the maze, and told their children, “just stay on the safe side of the wall and you’ll be all right.”
But then the village’s sheep started disappearing, people started seeing a monstrous thing in the shadows.

One day a Builder came to the village, and volunteered to create a barrier for the sheep and the children, so that the Monster would be kept at bay, and they would be safe.
The village rejoiced and it was built, so sturdy that they knew the children and animals would be safe.
Then the Builder offered to create a trap for the monster, and as bait to catch the Monster he offered himself—the Builder was the bait for the Monster.
That night he sat in his trap, and dusk came down. He could hear the Monster claw at the walls where the vulnerable were, but it did not break the barriers.
Then it entered his trap, rushing at him… and the trap was tripped, a net came down over the monster and scooped it up
… and the monster was revealed—it was the villagers themselves.
The Monster was the people, their anger, lust, and lies driving them to do things they could not imagine they were capable of.
And then in the light of day, the Builder unsprung his trap, releasing them all from the Monster.
Posted by Christopher at 2:17 PM No comments:

A colorful map of the Synods of the ELCA 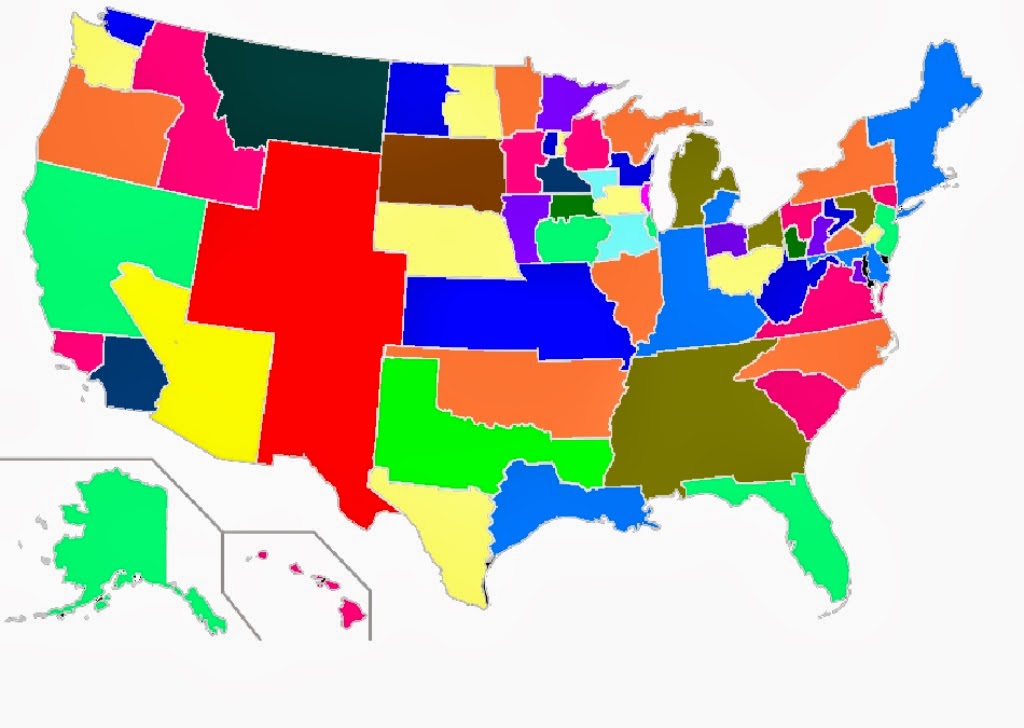 I'd noticed there were no maps of the 65 Synods of the ELCA that were very distinguishable--instead they were all monochromatic--so I colored them in.
PA and the Northern Midwestern patchwork are kinda funny--they're thick with Lutherans.
Posted by Christopher at 2:34 PM 2 comments:

Email ThisBlogThis!Share to TwitterShare to FacebookShare to Pinterest
Labels: ELCA

Sermon: The Kingdom of Heaven is meant to be shared

The Kingdom of Heaven is meant to be shared
Did you see the commercial for the newest breakfast cereal, Salt Cubes?
It starts off with Salty the cartoon deer in flannel and thick rimmed glasses pouring salt cubes into a bowl while two human children and their parents get ready for school and work. The dad takes the milk out of the fridge and is about to pour it on the cereal, when Salty puts his hoof over top of it and says, “Salt Cubes don’t need anything added to them. Just take a handful, chuck them in your mouth, and enjoy.”
Which the family proceeds to do—they look like their trying to imitate The Cookie Monster from Sesame Street—you know the one (demonstrate)—by the end there are crumbs of salt all over the place.
Then the Salt Cubes logo flies into place and an announcer says, “Salt Cubes: The Salty Breakfast Cereal!”

Or there’s the new product “Eye-HighBeam-Glasses” a competitor of Google Glass. As you may know Google-glass essentially puts all the features of a smart phone into a pair of glasses.
“Eye-HighBeam-Glasses” does something a little different. It takes two lights, as powerful as the high beams in your car, and constantly shines them in your eyes.

What is the Kingdom of Heaven?
We read today that we’ll be the least in the Kingdom of Heaven if we break a commandment, and if we’re not more righteous than the scribes and Pharisees we’ll never enter it.
Now, I know some of you naturally assume this is talking about heaven/heaven… as in, where we’d like to go when we die.
And that would be a frightening prospect. It would mean there is a hierarchy after we die. This might conjure up images of people on clouds playing harps,
some on really nice fluffy clouds, playing beautiful gold harps,
while others cling to storm clouds and play out-of-tune banjoes.

But that’s not what’s going on. Heaven, for Matthew— like other Jewish writers around this time, is a way to say God without saying God—most likely because he doesn’t want to overuse or misuse the divine name.
The Kingdom of Heaven—the Kingdom of God—is the hoped for rule of God, the time when all will be made right,
when the meek shall inherit the earth,
those who mourn will be comforted,
the merciful will receive mercy,
those who hunger for justice will be filled with it…

Sound familiar? It is the very thing Jesus proclaimed last week—the beatitudes, the blessing of the disinherited.
It is the very Ministry and Gospel of Jesus—it is what he accomplishes in his life, death, and resurrection,
and it is the calling we have on our lives as his Body in the World, the Church.
And so, the point of the Law (the Torah), which we read Jesus did not come to abolish, but to fulfill, is to make the Beatitudes a reality—and clearly he doesn’t think the way the Pharisees are living out the Law is doing that; neither would breaking the Law of God bring about the Beatitudes.

And yet, Jesus doesn’t ought us into salt/ or should on us, until we become light.
No, Jesus says we ARE Salt and we ARE light.

Salt can’t be anything but salt, and if a light is put under a basket that basket will soon be on fire.
Both Salt and Light are naturally occurring things, both gifts from the gracious God who created all that is.
It is not us who make ourselves Salt and Light, but the Holy Spirit calling us through scripture making us spicy and bright.
We are salt and light.
We share the Kingdom of Heaven in our life together. There are few places in our society outside the family where people of all ages meet together—but here we are, together. We share our sorrows and our joys with one another, lifting them both to God in prayer.
We flavor this world, by living in such a way that the jobs, identities, and relationships we have in it reflect God’s love for His Creation. We give space for our children to grow into their faith here among brothers and sisters of the faith, mothers and fathers of the faith.
We preserve our neighbors in need by collecting food and clothing for them and working for their wellbeing in a myriad of ways locally, and also nationally and globally, including the ELCA’s stellar work in creating affordable housing, stepping up when disaster strikes and staffing refugee camps throughout the world.
We brighten the world with our ongoing proclamation of the Gospel and many opportunities to reflect upon God’s Word. Most recently in the planting of a Lutheran church in Jordon, in a Middle East experiencing an ongoing depopulation of Christians, we are sticking around.
We shine a light on dark and confusing places when we wrestle with tough social issues,
and we highlight peacemaking when our Synod yearly sends teams to Bosnia to run Reconciliation Camps for children in order to help diffuse the longstanding tensions in that country, so the ethnic cleansing that happened in the 90’s will not happen again in the next generation.

And those are just the things I can come up with off the top of my head.
Brothers and sisters, the Holy Spirit has empowered us to be Salt and Light, and Christ has proclaimed it of us.
I challenge you this coming week to listen carefully to the Spirit, and when you catch yourself being Salt or Light, to ponder it and to thank God for it.

You are Salt and you are Light. The Kingdom of Heaven is meant to be shared.
A+A.
Posted by Christopher at 2:04 PM No comments: