Read, Reflect, Pray: A Lutheran Prayer Book is back!

As you may remember a while back I released Read, Reflect, Pray, and it actually sold moderately well… and then I found out I was using content without copyright.

Well, I am re-leasing a 500-book printing of RRP. It has a handsome new cover, 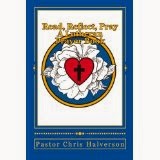 is organized in a clearer way, and is 100% legal!
RRP is in a sense an update of Doberstein’s A Lutheran Prayer Book with more voices of women, minorities, and ecumenical partners. It focuses thematically on the 7 central things of worship.
To purchase a copy via Amazon click here.
Posted by Christopher at 6:42 PM No comments:

Email ThisBlogThis!Share to TwitterShare to FacebookShare to Pinterest
Labels: prayer, The Central Things


On this, our final sermon in the 10 week sermon series “20 questions in 10 weeks” our final group of questions are about Sin and Forgiveness.
They are:
1.    Are mistakes “sins”? Are there degrees of sins? Is the sin in the intent or in the action or in the consequences? Ie. If you intend to do something good for someone and it turns out to hurt them?
2.    Explain “Keys to the Kingdom.” “Which you bind on earth shall be bound in heaven” etc.
A very short answer to these questions would be
1. They are all Sin and effects of Sin.
2. For Lutherans the key to “the Keys of the Kingdom” is the Word of God comforting our consciences.
Let us pray.

One of the biggest misunderstandings about the faith is the way most people think of Sin.
We assume it involves discrete acts, sins.
Just from a visual perspective, we mess around with S’s when we think through Sin. We make the first S lowercase, when it should be upper-case, and we add a second s, making it plural.
We go from Sin with a big S to sins with two small s’s.
(Medieval Catholic doctrine/Aristotle)
We worry about individual acts, things we can control. And in doing so, we shrivel up the Gospel and the Church, making the first a rule book and the second a social club or museum.

Little sins can’t explain the bizarre brokenness of the world we live in.
Maybe it can explain the shooting of Archduke Franz Ferdinand that started World War One, but it can’t explain the mechanized destruction that followed that shot.
Maybe it can explain an affair, but not all the broken pieces that led to that betrayal or the consequences thereafter.
Maybe it can explain a child left to starve, but not the situations that led to such wretched poverty.
We recognize that Sin is so much bigger than individual peccadilloes or immoderation or wrong action. We recognize that Sin permeates everything.
It’s as if, each and every last one of us, is a card within a house of cards. We were all, theoretically, stacked carefully and precariously atop one another. Even the slightest breath, a slight jarring of the table, would cause the whole house to fall down.
And that deck of cards is fallen, and we are constantly struggling fruitlessly toward our proper placement.
Every mistake is a card falling,
every intent, action, and consequence,
every one of the sins plural with a small s,
are cards knocking down the whole deck.
This deck is in a constant flurry of motion, Jacks falling atop crazy eights, and twos upon Kings. Every time a wall of a house is reconstructed two more fall down. The interactions of these cards grow in intensity until they become a splashing, bubbling, sea of black, red, and white.
Sin with a capital S is, to quote Paul, slavery. Human beings have sold ourselves, or perhaps been captured, by Sin and made to be its slave.

Or to borrow another image, we’re addicts, we’re addicted to Sin and cannot free ourselves.
Even if we were able to resist our addiction on our own, we’d still be a dry drunk—acting out as if drunk, while still sober—going along sinful pathways and experiencing the effects of Sin—even if we didn’t commit sins plural-lower-case.
And so I proclaim this to you sisters and brothers, the good news of Jesus Christ’s actions for us, are not that he patched up our hang-nail.
Not that he knows you fudged your taxes and looked the other way.
Not that he forgives you of your plural-little-s sins.

The Gospel is that Jesus has contended with a maelstrom of Sin, and he has calmed the storm, he has stood atop Sin’s back in triumph, he has defeated it.
That Jesus has bought us out of slavery because he’s our brother and that’s what brothers do for their siblings. That Jesus has stormed the slave house, snapped our chains, and smuggled us out of Sin’s grasp.
That Jesus brings us through the detox which comes with addiction—as the Good Physician. That he stands out in the parking lot as we chain smoke with a bunch of other sinners struggling together, that Jesus travels with us the whole way, even though we are always in recovery, even though we “remain sinners to the grave.”
Yes, Jesus is freeing us from Sin with a capital S.

And it’s worth proclaiming this loudly and often, because that’s really what the Power of the Keys is about.
It’s about speaking the gospel to people who have terrified consciences,
who see the swollen effects of Sin upon their lives and feel hopeless,
who need a word of grace in the midst of their guilt and loss and sorrow and struggle.
And this isn’t just something for the Pastor to do alone. It’s what we all ought to do.
Every day we hear confessions small and large—not in a formal way you understand—but naturally,
A conversation between neighbors,
a son’s words of worry to his father,
a coffee mate’s confession.
And to all these we can speak a word of truth about God being for us, not against us.
In all these we can be a beggar telling another beggar where we got some bread.
In the midst of dealing with the effects of Sin, both small and large, it is so important for people to know that Sin, with a big S, with its death dealing ways, has been defeated by the free gift of God, eternal life in Christ Jesus our Lord.
A+A.
Posted by Christopher at 8:42 AM No comments: