At this point I probably don't have to point out to you all that I'm the poster child for Seminary Debt.
Well, I've been asked to participate in an "EMU" (Excellence in Ministry Unleashed) event, and one of the things they asked me to do is block out an average month of spending.
Well, some good news, after nearly 5 years of fiercely fighting with my student/seminary debt (I owed $80,000 then, now I owe $17,000), it now only accounts for 13% of my spending, and has fallen to number 4 in the categories of things I put money toward (please note EMU use different categories than I did in past charts)! 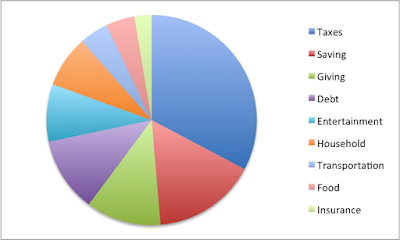 Posted by Christopher at 9:49 AM No comments:

Sermon: “Do you see this woman?"


Sermon: “Do you see this woman?
(I preached without notes, so this is approximately what I said this morning)
Jesus’ question, “do you see this woman?” echo forward in time, and ought to shake the dust of time and cultural baggage off our shoulders, even today.
Yes, “Do you see this woman?” today, this week.
This week in which a woman has becomes the pledged nominee of a major party here in the US for the first time.
It might seem like a time to spike the football, that everything is alright—that the woman is seen.
But this is also the week in which the Lutheran Church in Latvia has barred women from ordination after 41 years of ordaining them.
For that matter, this is the week in which we’re confronted by the Stanford Rape Case—a man raped a woman—and according to the rule of law he ought to be jailed for a minimum of 2 years—instead he was given 6 months—and then those 6 months were downgraded to 3.
And there is a history to all of this—it’s like that sage of the south, William Faulkner opined, “The past isn’t dead, it isn’t even past.”
Yes, our past interpretations of the scriptures of today weigh heavily upon our present and upon Jesus’ question: “Do you see this woman?”
Let us pray

Now, when we read the story of Bathsheba and David, we have a Cecil B. DeMille, Hollywood-ized understanding of it—we read it as essentially a romance…
But that is not the reading most scholar and other close readers of the story take from it. No, it is pretty clear that David raped Bathsheba, that “The thing David had done” that kindle’s God’s wrath, is rape.
After all, just read the story—David’s men took her from her home. Took her to the Palace. Took her to David’s bed.
Just read the story—Her husband is gone. Her husband is a foreigner living in a foreign land. David is king! Head that power differential!
So, yes, David raped Bathsheba.
The good news, such as it is—is that means we receive a prophetic word about rape!
The prophet Nathan tells us a story, about rape.
He describes Bathsheba’s sexual relationship with Uriah as growing together, the intimacy of eating and sharing a drink, a lamb laying on a bosom… yes, Nathan describes a woman as a farm animal, and that’s a problem—but still, hear the power of the metaphor he’s going for!
An ongoing, sharing, closeness—sex within such a bond, as the part of a larger relationship.
Then he describes David’s doing—rape—the consumption of the other—eating, devouring, killing, the little lamb.
Quite a contrast—right? Rape is to sex as intimate care is to greedy slaughter.
Thus says the prophet Nathan!

And, when I think back through my 5 years here—I think one of my most faithful acts happened this last Maundy Thursday… to be clear this is one of those hindsight things—I didn’t realize how faithful it was in the moment.
As you know, we have the first communion kids come up for their feet to be washed on Maundy Thursday… but (name redacted) didn’t want me to touch her feet.
Now, my initial inclination was to say, “tough, that’s what we do, and we don’t have time to argue…”
But, I decided against it—I respected this little girl’s wishes.
And thank God. Think of it, she learned that it was okay to say no to a male in authority with power—that her body is her own!
She learned, right here in church, that no means no.
That’s a deeply faithful message, and I hope and pray we continue to teach our boys and girls—and our adults too… that no means no.

Additionally, there is the strange gospel reading this morning—we read chunks from two chapters—and again there is a history there…
In the 500’s Pope Gregory the Great fused chapters 7 and 8, in order to define Mary Magdalene… as a prostitute. His line of “reasoning” went like this:
The woman in chapter 7 is called sinful—women are sexual, so clearly her sin was that of prostitution… and look, the first woman mentioned in chapter 8 is Mary Magdalene… so clearly Mary is a prostitute.
But think of the other ways she could have, should have, been defined—Mary who stayed with Jesus at the cross—Mary, the first witness of the resurrection, the first proclaimer of the faith—think of it—if women weren’t preaching, weren’t witnessing to Jesus—we wouldn’t be here right now, we wouldn’t know that God raised Jesus up—Christianity literally wouldn’t exist without the witness of women!
And while we’re on women, take a look at the second lady, Joanna. This here isn’t the only time she’s mentioned—Paul at the end of Romans, name-check’s here. He writes: “Greet Andronicus and Junia”… Junia being a Latinized way of saying Joanna “my relatives who were in prison with me”—the empire wasn’t in the habit of arresting woman, clearly Joanna was clearly a rabble-rouser for Jesus, “they are prominent among the apostles” Yes. Paul calls a woman an apostle—someone who knew Jesus both before and after the resurrection.
So, a woman apostle and the first preacher of Christ—both women… both women who join the disciples with Jesus as he does his Jesus thing, preaching good news to the poor, healing the sick, freeing the imprisoned, and so on… Right there, women leaders of the pre-church!
In short, when we shake off some cultural dust, and listen to what our scriptures tell us, how they continue to speak to us today
—we receive a prophetic word about power and sex from Nathan, a scriptural description of sex vs. rape. To a judge who would declare rape a youthful indiscretion, and a culture that thinks that’s okay, Nathan says no, and Jesus asks, “Do you see this woman?”
We also are reminded that women have been in leadership of the Christian Church from the beginning, we wouldn’t exist without women—the male domination of the Church is not a function of the faith, only of culture and our own myopic vision. To churches and bishops who would stifle the calling of the spirit upon the lives of women, the Gospel of Luke says no, and Jesus asks, “Do you see this woman?”
Amen and Alleluia.
Posted by Christopher at 10:21 AM No comments: